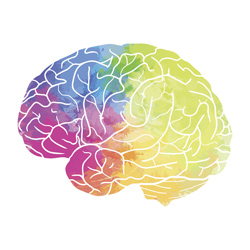 The amygdala, it turns out, is the root of some of our less-rational and more problematic behaviors. It has been identified as a primary organ of the paleomamillian mind - the mind of early human beings who spent their days mostly just trying to survive in a hostile world full of beasts of prey and other physical threats. The amygdala is an alarm system and an army all in one. If it senses danger it activates a powerful internal alert. Adrenaline and other hormones surge, muscular systems engage, and the body jumps into self- protective action: stand and fight the danger, or turn fast and flee from it.

Time and evolution eventually relegated the amygdala to a lower station in maintaining human life. Human beings came to live not by their ability to fight or to flee but by their wiles – intellect, creativity, planning, building, farming, forming communities, creating laws. These became the pathways to survival and success in an increasingly complex, socially based world.

The physical structure of the brain reflected these changes. The cerebral cortex developed and the logical centers of the brain expanded.  The right and the left hemispheres emerged.  Complex wiring was laid.  Inside each hemisphere the amygdala carried on – but now it had to work in conjunction with the powers of logic, creativity, conscious thought, and communication.

Although fending off threats of a physical nature became less important for day- to-day survival, the amygdala remained present -- alert and ready for action whenever called to duty.

So what does the amygdala mean to mediation in modern times?

Many high-conflict clients are prepared to fight or storm out of the room at the slightest provocation. Awash in angry reactions, they sense threat and danger in every comment and facial expression no matter how neutral or innocuous. Neuroscience has shown that these people may be victims of an over- developed amygdala or an underdeveloped or damaged pre-frontal cortex. The neurological wiring that interconnects the emotional and logical centers of the brain may be short-circuited or inadequate. People with high conflict personalities don’t have amygdala functioning that is well-suited for modern society – its danger alarm is easily triggered and its police force is always dressed in full riot gear.

Some researchers have suggested that the amygdala may also be the neurological seat of human prejudice.  Prejudice can be characterized as an hostile, often subconscious response to something that by its nature is not inherently dangerous or threatening. A prejudiced person may on a subconscious and instinctive level react negatively to people of certain races, ethnicities, genders, sexual orientations, ages, personality types, or physiques.  The amygdala signals threat.  It may make one walk on the other side of the street, sneer, tense up, act dismissively or inconsiderately, present negative facial expressions, or express anger.

System 2 thinking is the slower, very deliberate process of logic and conscious thought. System 2 thinking is engaged in solving math problems, writing articles, teaching, analyzing passages of poetry. It is the system we use to decide whether to confront a threat with negotiation rather than attack. It is the type of thinking we employ when working to overcome prejudices. System 2 thinking requires mental energy, time, and often emotional restraint.

In mediation practice, System 2 thinking is the brain process we strive to engage.

We want clients to think through their issues and come to interest-based, reasonable decisions. As mediators we seek to remain neutral at all times, to be aware of and constantly monitor and moderate our emotional responses and prejudices. It takes work to overcome System 1 thinking in mediation so as to achieve a System 2 result.

System 2 thinking, powered by the prefrontal cortex, can overcome even the most challenging calls of the amygdala to System 1 thinking. However, it takes time and practice, self-awareness, and a full box of mediation tools to learn to work through System 1 obstacles.

For high conflict personalities, the toughest of the tough cases, Bill Eddy has devised a mediation system that is highly structured and rules-based. You can read about it in his books such as “So What’s Your Proposal?”  To my thinking, it brilliantly masks a System 2 approach in a System 1 facade.

For the typical challenging but less hardcore cases, there are many ways to bring the prefrontal cortex to the fore. When tensions mount and tempers flare, or when prejudices erupt, recognize that the amygdala is firing on all cylinders. Use techniques that weaken the screaming signals of the amygdala and allow the calm rationality of the prefrontal cortex to rise forth. Calming after emotional responses allow System 2 thinking to take charge.

We have all seen how “time outs” calm fired-up children. Perhaps suggest some deep breathing exercises to clients. These create physiological responses that deactivate stress reactions and restore the quiet, deliberate mind. You might use a soft but steady voice – calmness, like high emotion, can be contagious.

Or remind the clients, as subtly as possible, of a pleasant memory from their past. If you have taken time in the early stages of mediation to learn about some of the activities that the couple used to enjoy together, such as fly fishing perhaps, find a way to shift the conversation to the movie “A River Runs Through It.” Or if they enjoy music, to a favorite song. This requires setting the stage for mediation with small talk about common interests, and listening.

You might also create some time for an activated amygdala to settle down by calling a caucus and working with the client who has become animated. Listen to that client’s concerns privately, let them know they are heard, and assure them that the process, though emotional at times, is designed for fairness.

Distraction also works. I have a huge white board literally painted on the wall of my mediation room. When things get heated sometimes I just get up and start writing on the wall. Write a list on the wall while clients are arguing and soon they pay attention to the crazy mediator and lose focus on their arguing.

One husband and wife team of mediators I know uses a sure-fire diversionary tactic to calm tense points in a mediation process. They literally call in their two cute dogs – who burst through the door of the mediation room tails wagging and eyes joyful and demanding attention from all. This not only provides some time for calming of tensions but also replaces the adrenal surges and hostile reactions of System 1 thinking with instant calmness and compassion (at least in regard to the puppies). But this does allow System 2 to recover and activate.

There are many simple techniques that weaken the Amygdala signal and allow the calm rationality of the pre-frontal cortex to rise up. Calling a short break in the action – a time out – works wonders. A well-timed deep-breathing exercise does too. Taking a long drink of water or preparing tea can work; snack breaks help; brief writing exercises such as having the clients make lists of anything relevant are powerful. (The act of writing is a System 2 function which will supersede the System 1 dynamics). Tell a relevant story that illustrates that other people, perhaps even the mediator, have gone through what they are experiencing (tell it with calm compassion).

The amygdala sees things only in black and white. So when it is firing on all cylinders, solutions to problems cannot be seen. A mediator might interrupt the action and ask permission to brainstorm some possible solutions. The mediator may start out by saying “I’m thinking there might be three or four ways to deal with this problem.” Then start asking questions to the clients about whether they see solutions. The more questions you ask, the more they are required to think and engage System 2. And soon, calm arrives and the pre- frontal cortex gets back to work.

One of the greatest tools of the mediator is asking questions to clients.

And really listening deeply. And asking more questions. Always checking in with the client who is not talking to make sure they are listening as well and reassuring them that soon they will be heard too.  If a client feels the mediator is biased (even in a particular moment), the amygdala will fire off some missiles. While listening attentively to one client be mindful to reassure the other.

The mediator as well must be on guard against his or her own amygdala.

Mediators come to the table with their own prejudices, predispositions, and subconscious bias. Monitor your own reactions to maintain impartiality. At times the mediator needs a time out, even if the clients do not. A bathroom break or a sudden need for a drink of water can get the mediator back to square.  Mindfulness, a System 2 process, is key.